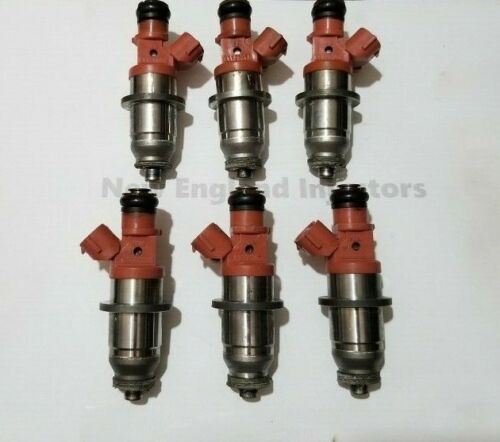 This is a set of 6 Yamaha 68F-13761-00-00 Injectors that will fit the boats listed below. Be cautious buying these injectors that are listed as "new" condition as there are a lot of Chinese knock offs currently flooding the market.

Here at New England Injectors we only use OEM injectors. These injectors will act brand new at a more cost effective price versus buying them new. These injectors may have some cosmetic flaws such as discoloration and small scrapes on the body but it does not affect the function of the injector.

All injectors have been ultrasonically cleaned, spray pattern/flow tested, and pressure tested to ensure no leaks. They are then rebuilt with new Viton O-rings and micro filters. All injector sets are matched within 2% and flow at the stock flow rate unless otherwise noted.

Here at New England Injectors we pride ourselves in our top notch customer service. Our priority is to ensure that our customers are happy. We answer your questions and assist you 7 days a week, our general response time is under 30 minutes. All injectors are tested to order! Please feel free to ask questions as needed and please check out our other listings. We strive for 5 star/100% feedback so if you are not fully satisfied please contact us first.

Injectors come with a 2 year warranty against all defects! We however are not responsible for misuse or improper installation of injectors. We recommend professional installation, along with replacing your fuel filter.

Sold out
Add to Cart